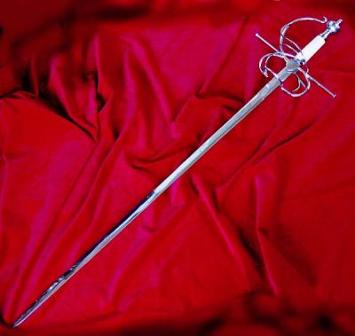 A type of Cool Sword, the rapier is often associated with those of high class, or at least some suave character.

Note that in the hey-day of the rapier, it was as likely to be associated with traveling entertainers who gave what we would call “performances” with the rapier and buckler (small shield—hence the term Swashbuckler) as with the courtiers, like Pietro Monte, whose favorite weapon it was. Old-fashioned gentlemen of the Elizabethan period tended to despise the “foining” and dancing they associated with the weapon, and preferred the good old longsword.

If your characters are living in The Cavalier Years, and especially musketeers are involved, you can definitely expect them to use rapiers.

Also included is the espada ropera.

Examples of Royal Rapier include: