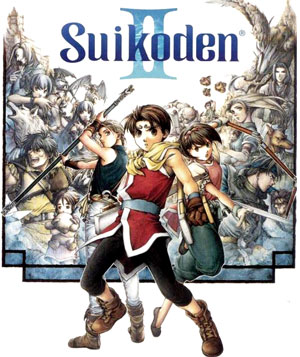 Three years after the events of the original game, the nation of Jowston has just signed a ceasefire with the Highland Kingdom. The protagonist, an orphan adopted by the late hero Genkaku, has just joined the army alongside his best friend Jowy. However, they fall afoul of one of the most twisted examples of a False-Flag Operation ever attempted, courtesy of Complete Monster Luca Blight. Barely escaping this fate, they soon find themselves saddling with the two halves of the Rune of the Beginning, the Black Sword Rune and the Bright Shield Rune. From there, their paths split, as the protagonist takes the traditional hero's route, and Jowy sets out to break the system from within, setting the stage for a war where both sides fight for the exact same goal.

Better than this pithy blurb makes it sound, really. Suikoden II takes the themes established in the first game and weaves a far more complex plot around them, with heavy doses of Grey and Gray Morality and a Complete Monster thrown into the mix. Add in plenty of Continuity Nods, the return of several fan favorites and a liberal dose of Player Punches, and you've got a game which is still considered the high point of the series by much of the fandom.

Tropes used in Suikoden II include:
Retrieved from "https://allthetropes.org/w/index.php?title=Suikoden_II&oldid=1684662"
Categories:
Cookies help us deliver our services. By using our services, you agree to our use of cookies.