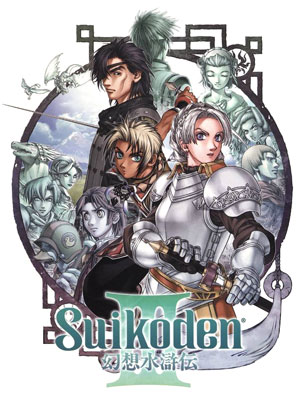 The first Suikoden game on the PlayStation 2, Suikoden III revolves around several smaller groups of heroes long before the Stars of Destiny come into play. Set fifteen years after the events of Suikoden II, it begins with an uneasy cease-fire between the Grassland tribes and the mercantile nation of the Zexen Confederacy. Meanwhile, the Holy Kingdom of Harmonia is waiting for a secret truce with the Grasslanders to hurry up and expire so they can launch their own offensive. This simmering pot of tensions boils over with a single horrific act, and the chain of events is filtered through the eyes -- and guided by the actions of -- several protagonists:

In this way, the game introduces many of the Stars of Destiny in smaller groups, resulting in more Character Development and allowing the player a much more extensive view into the motivations of every faction involved in the conflict, up to the point where the storylines merge and the heroes unite against a common enemy.

Also, the manga adaptation is awesome incarnate, as this wiki itself will tell you.

Tropes used in Suikoden III include:
Retrieved from "https://allthetropes.org/w/index.php?title=Suikoden_III&oldid=1881832"
Categories:
Cookies help us deliver our services. By using our services, you agree to our use of cookies.