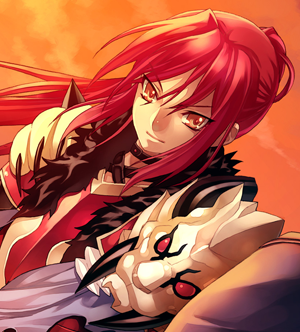 Blaze Union: Story to Reach the Future is a Turn-Based Strategy game for the PSP produced by Sting Entertainment and published by Atlus. While not a Dept. Heaven episode, it is the prequel to Yggdra Union, Episode II in the series. The game is currently out in Japan, and as of yet there's still No Export for You.

Three years before the events of Yggdra Union—in an era where most of the various countries on the continent were enjoying a temporary peace—the Bronquian Empire alone was mired in suffering. The current Emperor, Soltier, was incompetent and his court corrupt, and the rich lived at the expense of the poor and helpless. With the country slowly rotting beneath that malgovernment, one young man in the slums of the trade city Tiera began to desire power in order to change the country and save his people.

That young man, the Hot-Blooded seventeen-year-old idealist Garlot, and his childhood friends Siskier and Jenon formed a vigilante band in an attempt to protect the poor of Tiera. The turbulent events of their first major battle with the rich attracts the attention of the vagabond Medoute and liberal nobleman Velleman, the latter of whom offers them the chance to become his army and gain strength and influence enough to destroy the banditry and corruption killing Bronquia from the inside. Joined by the mysterious fugitive twins Luciana and Aegina, itinerant prophet and tactician Nessiah, cute orphan girl Eimi, and a whole mess of other people described here, they will delve into the true nature of justice and power while fighting to reach a brighter future for their tormented country.

Blaze Union utilizes a streamlined version of Yggdra Union's systems, with one major exception: there are certain parts of the game where the player will be able to choose missions that he or she prefers to take on. Depending on which missions one undertakes, different cards and allies can be obtained, and ultimately the choices you make in missions will affect the game's Multiple Endings. The plot of the game is more character-driven than that of Yggdra Union, reflecting the effects of Garlot's horrifically abusive upbringing on his psyche and his lingering sense of powerlessness; it combines Slice of Life and Coming of Age Story elements with a good hard look at the poor quality of life in Bronquia prior to the revolution.

The game has three routes, which focus on Garlot, Aegina and Soltier respectively. Much like in a Visual Novel, the climactic events of each route vary wildly, bringing the main characters to vastly differing conclusions.

See also Yggdra Union, the main title; its Gaiden Game spinoff Yggdra Unison (in which the Imperial Army's story continues towards a more positive conclusion); and Gloria Union, in which one of this game's characters has a guest appearance.

Tropes used in Blaze Union include:
Retrieved from "https://allthetropes.org/w/index.php?title=Blaze_Union&oldid=1773374"
Categories: