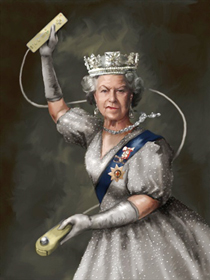 When royalty speak on behalf of their office (at least in Western systems) they tend to use the Royal We or Pluralis Maiestatis. This was most famously used by Queen "We are not amused" Victoria, who believed herself to be the avatar for the British Empire. This happens in fiction as well. A good way to show when the monarch in question has had enough and demands obedience is to have them switch to this form of address. Another way is to use this comedically, have a monarch use this in informal contexts or have people confuse the majestic plural for the regular one. ("Where are the rest of them?")

The origin of this tradition is the idea that the monarch in question is speaking for the nation, although it was also used by religious officials in times gone by. (Although using that phrase when discussing your breakfast can be a bit strange.) Sometimes other characters will reinforce this by referring to the monarch by the name of their country; in Hamlet, for example, Claudius and the dead king are both referred to as Denmark, and another king is only ever called Norway.

Also, some European languages use the plural to address other people formally. Even English does this, in a way—originally, "you" was only used as a plural objective; the nominative was "ye" and the singular equivalents were (nominative) "thou" and (objective) "thee". However, using "you" as a formal term for a single person, even as subject, became so commonplace that it replaced "ye" and "thou" entirely. Yes, "you" was MORE formal than "thou", regardless of how it sounds to the modern ear.

Of course, if the royal in question is a Hive Queen, it all makes a lot more sense. Finally, note that no matter how many times she refers to herself as "We", the Queen of England does not like being addressed as "Y'all".

Examples of Royal We include:

Retrieved from "https://allthetropes.org/w/index.php?title=Royal_We&oldid=1849683"
Categories:
Cookies help us deliver our services. By using our services, you agree to our use of cookies.