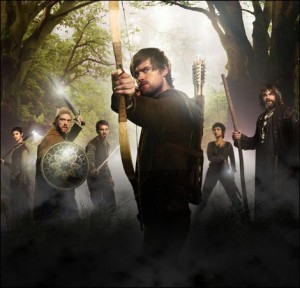 Robin, plus the (typical configuration of) outlaws.

2006-2009 British adaptation of the Robin Hood legend, with Jonas Armstrong playing the title character. The show made some interesting changes to the legend. Friar Tuck was omitted for the first two seasons, and when he appeared in Series 3, he was turned into a Black warrior priest. Marian was not referred to as "Maid" and became something of an Action Girl in her "Nightwatchman" Secret Identity. The Merry Men (which included a Saracen Woman) were not referred to as such, being only called "the outlaws". Green tights were conspicuous by their absence.

The show was best known for its anachronistic take on medieval history and its superb cast. It is now probably remembered most for its controversial decision to kill off Marian. Despite initial comments by the BBC that actress Lucy Griffiths had left of her own accord, further controversy arose with the release of Series 2 on DVD in which creators Dominic Minghella and Foz Allen not only revealed that it was their choice to kill Marian in an attempt to "rock the show", but that the death scene was purposefully shot with markedly sexual overtones. Dominic Minghella, the man responsible for the episode wherein Marian was killed, was not involved in Series 3 and seemingly provided no consultancy concerning what "storytelling opportunities" he had in mind for the follow-up to Marian's death.

Series Three was a Retool of the show, with new writers, characters, costumes and storylines. Although new cast member Isabella and guest star Prince John were generally well received by fandom, Tuck and Kate, the replacements for Will Scarlett and Djaq the Saracen (written out at the same time as Marian) were not. The show eventually revealed that Guy and Robin shared a half-brother called Archer, in an attempt to set up Robin Hood as a Legacy Character that could carry on the show after the mass cast exodus that took place at the end of the series.

The show concluded with the Sheriff, Isabella, Guy and Robin all killing one another with assorted swords, poisoned daggers and explosions. Robin was taken to Sherwood Forest, and as he dies, he is reunited with Marian in the afterlife. Although only two out of the nine original cast members remained, the writers left room for the series to continue, with mention of King Richard being held hostage in Austria (as per historical record), Prince John still in power, and Archer taking up the mantle of Robin Hood as the outlaws' leader.

The show was not renewed for a fourth series. Has a Character Sheet and an Episode Guide.