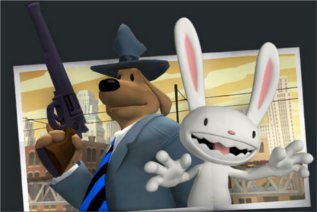 That's Sam on the left and Max on the right. Don't get them mi... what do you mean I did that joke already?

Sam & Max were quite popular at Lucasarts, and after getting cameos and Shout Outs in several Lucasarts adventure games, the two got their own game in 1993: Sam & Max Hit the Road, which had the two traveling a pastiche of roadside America tracking down a Bigfoot that had escaped from a carnival sideshow with a giraffe-necked girl. It was done in the SCUMM engine, the same as other LucasArts classics such as Monkey Island.

A long-awaited sequel to Sam & Max Hit the Road was announced by Lucasarts in 2002, but in March of 2004, the project was unceremoniously canceled. Fans were incensed, as were several members of the Lucasarts team, who left to found their own game company: Telltale Games. In 2005, Telltale announced they would be working with Steve Purcell to produce an episodic Sam & Max adventure game, and in late 2006, the first episode of Sam & Max: Season 1 was released.

Over the course of six episodes (the final one released in May of 2007), our heroes matched wits with former child stars, a bossy talk show host, the Toy Mafia, the U.S. government, the Internet, and a cult leader in order to foil a series of mass-hypnosis plots. Sam and Max: Season 2 (running from November 2007 to April 2008) had the Freelance Police facing demonic possession in Santa's workshop, the Bermuda Triangle, a Goth vampire and his army of club-hopping zombies, a sinister cabal known only as T-H-E-M, and the forces of Hell. The complete Season 1 for Wii was released in 2008. In 2009, Telltale announced that Seasons 1 and 2 would be on Xbox Live Arcade, under different names (Sam & Max Save the World and Sam & Max Beyond Time and Space, respectively). Most other places that sell the games online, like Steam and Telltale's official site, have switched to those names, as well. The third season The Devil's Playhouse ran from April to August 2010, and saw the Freelance Police embroiled in a plot to collect "Toys of Power" that grant those with the ability to wield them (including Max, conveniently enough) awesome psychic powers. Said plot involves evil gorillas from space, eldritch horrors and mole-men.

Tropes used in The Adventures of Sam & Max: Freelance Police include: