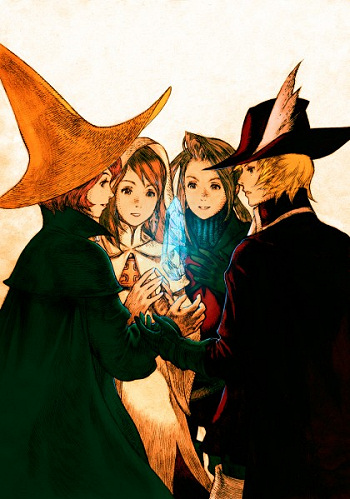 The third entry in the brain-implodingly popular Final Fantasy series.

Kids will be kids, right? And if you tell them that a particular abandoned and unguarded cave is dangerous, you can pretty much expect the kids to wander in. This goes double if the kids in question are orphans and don't really have parental influences in their lives.

Little do the orphans know, they're about to stumble on a power that will change their lives, and force them to save the world. With the crystals of light sensing that darkness is about to take over, they find the first folks to come along to grant their powers - the four orphans. It's now up to these kids, so inexperienced that they're called Onion Kids (after the Japanese term negibozu, literally a green onion sprout but also meaning a callow youth), to save the world.

For a long time called the "lost" Final Fantasy, as it was never released anywhere outside of Japan for many years - even after all of the other pre-PlayStation games received at least one release. However, a remake, with more plot and characterisation, came out worldwide on the Nintendo DS, finally getting the game to a wider audience. And now, the DS version has been ported to iOS.

Ironically enough, in terms of gameplay, it's very much one of the most important games in the series, as several concepts in the series as a whole originate in this game. Moogles, summon magic, terrain effects... this game started many of them.

Tropes used in Final Fantasy III include:
Retrieved from "https://allthetropes.org/w/index.php?title=Final_Fantasy_III&oldid=1705169"
Categories:
Cookies help us deliver our services. By using our services, you agree to our use of cookies.