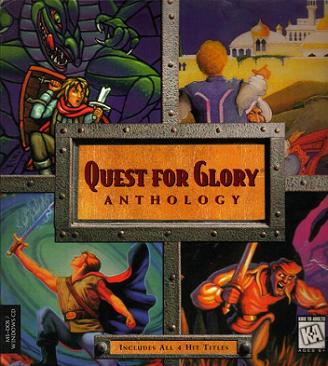 Back in the 80s and throughout the 90s, Sierra was big in adventures. We had King's Quest, Police Quest, Space Quest and everything you could stick a "Quest" to (and a couple of other ones). What most of these have in common, though, was that they used variants on the same engine and thus had the same game play, first using the parser ("get item") then using a more "traditional" (for adventures) point and click interface.

One series that differed a bit from this formula, however, was the Quest for Glory series, using a Mix And Match of Adventure and RPG. But that was not everything; the games also were a brilliant (and hilarious) Affectionate Parody of the adventure genre and had a very strong continuity despite being spread out over the course of nine years. Originally called Hero's Quest, before copyright issues with Milton Bradley resulted in them changing the name.

Planned originally as a quartet of games, Quest for Glory follows the adventures of an unnamed hero, from his very first trials to the point where he finally becomes a true hero - and beyond. The series is well remembered by fans for its ability to seamlessly combine epic fantasy stories often of surprising complexities with unique and colorful locations and surreal humor worthy of a Lucasarts game into one strong package.

The games are, in chronological order:

Quest for Glory was created and designed by husband-wife couple Lori Ann Cole and Corey Cole. They have tried to buy the rights to the series from Sierra (now swallowed by a network of larger companies), though to no avail. Their homepage can be visited at https://web.archive.org/web/20131122132230/http://www.transolar.com/

The entire series can be purchased at Good Old Games. The second game has a VGA fan remake that is compatible with modern computers.

Tropes used in Quest for Glory include:
Retrieved from "https://allthetropes.org/w/index.php?title=Quest_for_Glory&oldid=1938796"
Categories:
Cookies help us deliver our services. By using our services, you agree to our use of cookies.