Echo Chamber: The Adventures of a TV Tropes Vlogger is a 2011-2012 TV Tropes video show. The show is about the travails of a group of tropers trying to make a "Trope of the Week" video series. Which they do. Sort of. In spite of their best efforts.

The series can be found on ShareTV here.

Tropes used in Echo Chamber include:

Episode 1.1: Show Within a Show

Episode 1.4: Dumbass Has a Point 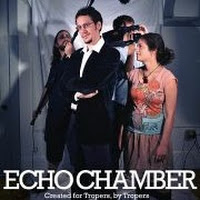 Tropes used by the series in general:

Retrieved from "https://allthetropes.org/w/index.php?title=Echo_Chamber&oldid=1883533"
Categories:
Cookies help us deliver our services. By using our services, you agree to our use of cookies.