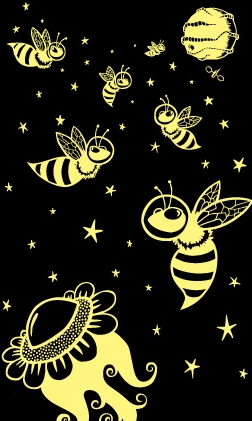 Taking regular words and giving them appropriate futuristic flair with a simple addition since the 1930's.

A Sub-Trope of Call a Smeerp a Rabbit, rarely played straight these days but still used often when parodying or hanging a lampshade on a certain setting's Recycled in Space trappings. Constructions like "Batharian hound" or "Ar'ha'sds'gdian bat" also qualify.

Of course, this kind of construction rests on an inherent geocentric bias. Contrary to how the word is often used, "space" does not refer to everything in the universe except for Earth; it refers to everything in the universe, Earth included. So a creature from another planet is no more "spacey" than a creature on Earth is - unless, of course, the creature can somehow exist in the vacuum of space without breathing gear. (Another possible meaning for "space" is everything rather far away from a celestial body, such as outside its atmosphere. This use, however, means that nothing alive can be "spacey" — except, perhaps, Space Whales and such.)

There is, believe it or not, a Real Life precedent for this. Consider all the Sea Lions and Sea Anemones and Sea Horses and Sea Stars and Sea Robins and so on and so forth, not to mention all the Catfish, Dogfish, Parrotfish, Lizardfish, ad infinitum. (The reason for this, if you were wondering, is that in the early days of biology, it was thought that every land animal had an undersea equivalent. Obviously this theory didn't quite work out, hence a pretty epic level of Calling Smeerps Rabbits.)

Compare the various Thememobiles and Hold Your Hippogriffs. See also Recycled in Space, Space Jews, and Sci Fi Name Buzzwords. Not to be confused with the material from which brand-name Latex Space Suits are made, nor the rocket company.

Retrieved from "https://allthetropes.org/w/index.php?title=Space_X&oldid=1864341"
Categories:
Cookies help us deliver our services. By using our services, you agree to our use of cookies.