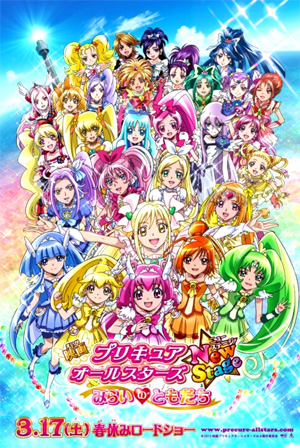 Beating evil into the ground with rainbows and kicks since 2004.

Base entry for the Pretty Cure franchise.

This is a Cash Cow Franchise metaseries created Anime First by Toei Animation and spanning many an Alternate Continuity. Each series revolves around a certain number of girls being chosen to Save Both Worlds (in this case, Earth and the world of the fluffy talking mascots) from those that would spread misery and ruin.

The series distinguishes itself from other Magical Girl series in the high amount of physical fighting and Post Modernism included, and through the dynamic of having two central main characters who can only transform and use their most powerful abilities in tandem; although, this element has been phased out as the yen poured in. The series focuses heavily on The Power of Friendship and the Character Development between the lead characters.

The first series was Futari wa Pretty Cure ("The Two of Us Are Pretty Cure"), a show where a Red Oni, Blue Oni duo of Japanese schoolgirls -- Nagisa Misumi and Honoka Yukishiro -- are forced to work together to fight the invading inhabitants of the Dusk Zone, retrieve all seven Prism Stones and free the Queen of Light. As Cure Black and Cure White respectively, they set the standard for many of the show's recurring tropes. The show is also notable for its Seinen elements, including an abundance of action-packed physical combat (directed by the guy who did Dragonball Z!) and blatant yuri subtext between Nagisa and Honoka.

The show did so well that it got a direct sequel as Futari Wa Pretty Cure MaX Heart. The Evil King of the Dusk Zone revives again and the Queen of Light is forced to split herself into pieces, one of which manifests as a young girl called Hikari. Cure Black and White are given a power-up and sent out to retrieve all the pieces of the Queen with the help of Hikari, who can transform into Third Ranger and Support Party Member Shiny Luminous.

Futari Wa Pretty Cure Splash*Star is the first to be set in an Alternate Continuity. At first the show was an awkward Expy of the original series, with not-Nagisa Saki Hyuuga (Cure Bloom) and non-Honoka Mai Mishou (Cure Egret) fighting to free the seven World Fountains from the control of the evil Dark Fall. In addition, Moral Guardians had forced many of the Seinen elements unique to Pretty Cure to be downsized, resulting in battles that focused less on hard-hitting fisticuffs and more on non-contact magical attacks. However, once past that initial awkward phase the series grew into its own identity, adding two Dark Magical Girls as rivals and establishing Saki and Mai as their own characters.

Yes! Pretty Cure 5 caused an uproar by diverging from the previous Pretty Cure formula in favour of a more standard Magical Girl show with a Sailor Moon-esque team of five equals. Idiot Hero Nozomi Yumehara (Cure Dream) and her four team-mates have to catch fifty-five fairy critters with their extremely cool and affordable watches before the evil Nightmare Corporation does. Yes! did start one new trend for the franchise: including the phrase "Pretty Cure" in every attack name and transformation phrase.

Yes! Pretty Cure 5 Go!Go! (the 5 is still pronounced "faibu", slightly obscuring the Incredibly Lame Pun) continues the story of Nozomi and her friends, only this time they are trying to save the four rulers of Magical Land from an evil museum called Eternal with the help of a flying mailman penguin named Syrup. They also pick up a mysterious Sixth Ranger called "Milky Rose", whose true identity is... shocking, really.

The sixth series, Fresh Pretty Cure, switches to the adventures of Love Momozono (Cure Peach) and her two friends (Cure Berry and Cure Pine) as they fight against the sinister agents of Labyrinth over a mysterious MacGuffin called Infinity. There's plenty of dancing, Mid Season Upgrades that arrive way too early and a pretty epic character arc that results in the birth of the fourth Pretty Cure, Cure Passion.

Heartcatch Pretty Cure focuses on flower-loving introvert Tsubomi Hanasaki and fashion-loving Genki Girl Erika Kurumi, who transform into Cure Blossom and Cure Marine (respectively) to fight the evil Desertrians and their quest to steal the "Heart Flowers" of innocent people and turn the world into a desert. Highlights include character designs by Ojamajo Doremi illustrator Yoshihiko Umakoshi, and a heart-wrenching series-long subplot about a fallen Pretty Cure called Cure Moonlight.

Suite Pretty Cure brings the Wonder Twin Powers back again with Tomboy and Girly Girl Hibiki Houjou and Kanade Minamino as Cure Melody and Cure Rhythm (respectively). The two fight against the villains of Minor Land, who seek to sing the Melody of Sorrow and plunge the world into despair. Helping them out is Third Ranger Cure Beat, a mysterious masked Aloof Ally called Cure Muse, and a ridiculous Lensman Arms Race of Mid Season Upgrades.

Smile Pretty Cure, the latest Pretty Cure series, goes back to having a core team of five. The theme of the show is fairy tales, as the Smile team work with the storybook critters of Märchenland against the baddies of the Bad End Kingdom, who seek to awaken their lord Pierrot and bring the "Worst Ending" to the world.

There is also a series of Pretty Cure All Stars movies, teaming up characters from all series, as well as a short film and a video game that do the same. Together, these make up the Crossover Compilation.

Furthermore, most seasons have at least one movie that makes no canonical sense (most of the time) but can't be thrown out because of something really awesome happening in it.

The Franchise seems to have very good relations with Tokusatsu : it's produced by Toei, which also produces Super Sentai and Kamen Rider, and the three franchises are aired back to back in the appropriately named Super Hero Time block. The Pretty Cure and Super Sentai movies have been played as double bills, and Nagisa and Honoka teamed up with Tokusou Sentai Dekaranger characters in an audio drama, and later with Mahou Sentai Magiranger. Gundam has a less than amiable relation with Pretty Cure as those who had a role in Gundam went on to play villains for Pretty Cure.

There is also a manga for each series, going into depth in various ignored aspects, like Rin's crush on Nuts and Saki's little sister's life.

The following tropes are common to many or all entries in the Pretty Cure franchise.
For tropes specific to individual installments, visit their respective work pages.

For individual series examples, go to their pages. The following tropes appear in more than one series of this franchise.

Retrieved from "https://allthetropes.org/w/index.php?title=Pretty_Cure&oldid=1876003"
Categories:
Cookies help us deliver our services. By using our services, you agree to our use of cookies.