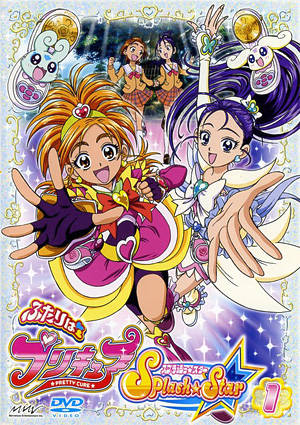 The third series in the Pretty Cure franchise.

Mai Mishou, a calm, sweet-hearted artist, is returning to her hometown after several years away. She goes to the large tree she used to visit as a child and runs into Saki Hyuuga, an outgoing softball player. Just as they both remember that they once met each other as children in this precise spot, two fairies called Flappy and Choppy come out of nowhere and attach themselves to the girls.

The fairies are fleeing from the forces of Dark Fall, an otherworldly group seeking to capture the seven World Fountains that feed the World Tree. The last World Fountain is located somewhere on Earth, and Dark Fall will stop at nothing to find it. To defend themselves from the monsters of Dark Fall, Saki and Mai agree to use the fairies' power and transform into Cure Bloom and Cure Egret: the Legendary Warriors, Pretty Cure.

Splash*Star starts as a near-Expy of the original series, as Toei clearly wanted to continue the Pretty Cure franchise but were concerned about how fans would receive a series that did not include Nagisa and Honoka. Complaints from Moral Guardians had also caused many of the Seinen elements synonymous with Pretty Cure to be toned down: instead of the hard-hitting fisticuffs of Black and White, Bloom and Egret primarily used non-contact magical attacks, flinging bolts of energy around and flying all over the place.

However, after time the show finds its feet and develops its own identity. Mai and Saki grow to distinguish their personalities from their predecessors and lookalikes. Bloom and Egret develop unique fighting styles, with Bloom focusing on ground attacks and brute strength, while Egret specialises in agile aerial attacks. The show later adds two Dark Magical Girls as Foils, and a Mid-Season Upgrade that gives a Super Mode to Bloom and Egret, upgrading them to Cure Bright and Cure Windy respectively.