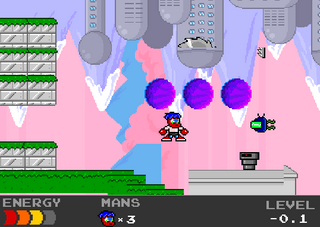 Sometimes the best level is one the designers never made. Minus Worlds are areas of the map a player can reach only by glitching or hacking. These secret areas do not typically correspond to valid, intentional level data at all - it is only by dint of the game's programming that these 'junk data' manifest as a mostly playable level.

With the advent of modern 3D games, this has mostly fallen by the wayside, as random data would never create anything remotely close to a functioning 3D mesh. However, the collision detection in some 3D games is suspect; in some of them, you can actually leave the game world and explore a weird wasteland of partly implemented scenery and flickering polygons. In that case, the level is still there; the player has simply found a way to be where the game doesn't expect the player to be. (See Dummied Out.)

Related to Kill Screen. If a sprite appears in the game that was made out of similar 'junk data', see The Missingno. If a Minus World is used for Sequence Breaking, see Fake Skill.

Examples of Minus World include:

Note: non-Video Game examples are at the bottom of the page.

Retrieved from "https://allthetropes.org/w/index.php?title=Minus_World&oldid=1961705"
Categories:
Cookies help us deliver our services. By using our services, you agree to our use of cookies.