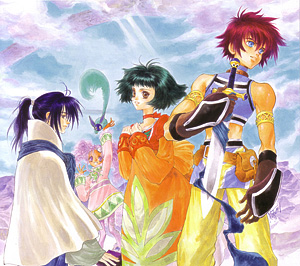 In the remote farming village of Rasheans, Reid Hershel lives a simple and boring life with his best friend, Farah Oersted. That was until the day they witness an airship fall from the sky and crash into the nearby forest. From the wreck emerges a strange girl wearing foreign clothing and speaking an alien language. Farah jumps at the opportunity to help out the girl, and drags the reluctant and lazy Reid along for the ride.

With the help of their childhood friend and scholar Keele Zeibel, Reid and Farah discover the terrible warning that the girl- named Meredy- has brought: that the two worlds that make up the Eternia universe are destined to collide, with apocalyptic consequences.

Tales of Eternia is a Japanese PlayStation action role-playing video game released by Namco in 2000, and later ported to PlayStation Portable in 2005. Eternia is a 2D anime-style RPG with an original real-time battle system taken from its predecessors, Tales of Phantasia and Tales of Destiny. In addition, this game actually introduced many features that are still in use in many Tales (series) games today.

The game inspired Tales of Eternia: The Animation, a 13 episode anime series co-produced by Production I.G, which is loosely based on the game. The series focuses on the four heroes while introducing some new faces in a subplot unrelated to the actual game's plot. All 13 episodes of the series were animated in early 2001.

Tropes used in Tales of Eternia include:
Retrieved from "https://allthetropes.org/w/index.php?title=Tales_of_Eternia&oldid=1831213"
Categories:
Cookies help us deliver our services. By using our services, you agree to our use of cookies.