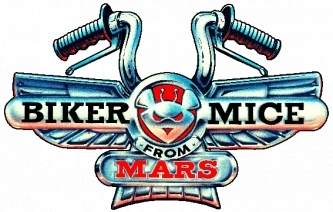 A cartoon about giant mice from Mars who ride motorbikes. Wandering out in space after fleeing from their near-dead planet, Throttle, Modo and Vinnie are shot up by Plutarkians and crash-land in a Chicago scoreboard in the middle of a game.

While attempting to find a mechanic to fix Throttle's bike, they find Charley's Last Chance Garage and stop in. They find that she's being bullied by a henchman of the show's Big Bad, an alien who calls himself Mr. Limburger, to sign over the property. Mice step in, ass gets kicked, and they all get embroiled to save the planet from the ravening maw of the Plutarkian Empire (which apparently has a practice of strip-mining and carting off everything of value on and in a planet).

Biker Mice from Mars first aired in 1993 and ran for three seasons. The show received a Revival in 2006; in this Sequel Series, the evil aliens are a felinoid race, the Catatonians. Both series were created by Rick Ungar.

Tropes used in Biker Mice From Mars include:
Retrieved from "https://allthetropes.org/w/index.php?title=Biker_Mice_From_Mars&oldid=1884917"
Categories:
Cookies help us deliver our services. By using our services, you agree to our use of cookies.