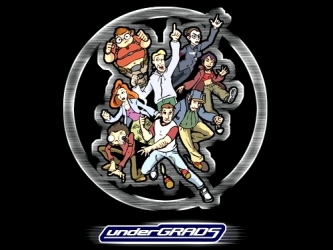 Undergrads was a short-lived animated series from 2001, made for MTV. Like other MTV cartoons, such as Daria and Beavis and Butthead, it was adult-oriented and contained very mature content. Only 13 episodes were produced, and the show ended on a cliffhanger.

The show is about four lifelong friends and their experiences during their first year at college. Nitz, the protagonist, is an Every Man who constantly lets college life stress him out. Cal, his roommate, is a Dumb Blonde Ditz with an inexplicably rich sex life. Rocko is part of a fraternity and is obsessed with girls, booze, and Wacky Fratboy Hijinx, to the annoyance of his frat mates. The fourth, Gimpy (called G-Prime by his peers), is a tech geek who attends an MIT-like university and develops a personal cult due to his hacking prowess. He stays connected to the others mainly via the internet, though they all still live in the same city.

At the start of the year, two major people are introduced to the audience: Jessie, a hip, punk-ish girl who befriends Nitz and helps him learn the ropes (and later develops a crush on him), and Kimmy, a beautiful drama student with whom Nitz is smitten (and has been since high school). There are other recurring characters as well, including Rocko's frat "friends," Nitz and Cal's hippie-like Residential Assistant The Douggler, Jessie's friends (Brody, a film student with an encyclopedic knowledge of pop culture and old movies, Krueger, a profanity-spewing chain smoker, and Dan, a geek who just laughs), Kimmy's (unbeknownst to her, gay) friend Mark, and Gimpy's minions.

Although the show is set in college, the characters are almost never shown in class; episodes mainly focus on other aspects of campus life, like dealing with roommates, fitting in with groups, attending mixers, getting student loans, and figuring out what to do in life. Oh, and girls and booze, naturally.

Tropes used in Undergrads include:
Retrieved from "https://allthetropes.org/w/index.php?title=Undergrads&oldid=1791756"
Categories:
Cookies help us deliver our services. By using our services, you agree to our use of cookies.