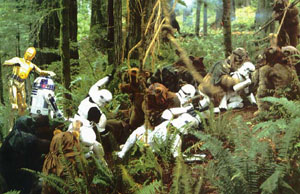 Damn it, why didn't we upgrade the anti-stick shielding on this armor?

In fiction, armor has virtually no protective qualities. Characters who wear no armor to speak of are no more (and often less) at risk of injury or death than somebody who is "protected". Indeed, it's often the case that people who wear armor find themselves far more competent after they either discard it or have it destroyed for them by the nice people out to kill them. In the latter case, it leaves one wondering why they bothered with it in the first place, if they can survive attacks that completely demolish their armor anyway.

This trope probably stems from the fact that armor—especially helmets—in movies, games, and other media often serves not to protect characters but to render them faceless and anonymous. Thus dehumanized, they make excellent Red Shirt and Mooks. The Unspoken Plan Guarantee may also be connected; the armor represents a plan to be invulnerable, which, once presented to the audience, has to fail or it'd be boringly predictable. (This helps explain why hidden Bulletproof Vests usually work.)

See also The Law of Diminishing Defensive Effort. The logical extreme of this trope is the Full-Frontal Assault. For non-armor objects that make for bizarrely non-useless armor, see Pocket Protector.

Examples of Armor Is Useless include:

Retrieved from "https://allthetropes.org/w/index.php?title=Armor_Is_Useless&oldid=1892028"
Categories:
Cookies help us deliver our services. By using our services, you agree to our use of cookies.