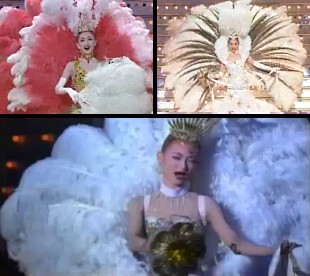 Wearing feathers for, fashion. There aren't any ceremonial reasons for trying to look/be like a bird, the feathers are being worn just to look nice. Whether wearing large plumes or trimmings of down feathers, it's all fashionable, in fiction or in Real Life.

A Sister Trope to Pretty in Mink (in that many times feathers are worn in a similar way as fur).

Finally, any examples of Peacock Girl, where the feathers are worn instead of a character having a peacock tail, would be examples of this.

Examples of Fluffy Fashion Feathers include:

Retrieved from "https://allthetropes.org/w/index.php?title=Fluffy_Fashion_Feathers&oldid=1735178"
Categories:
Cookies help us deliver our services. By using our services, you agree to our use of cookies.