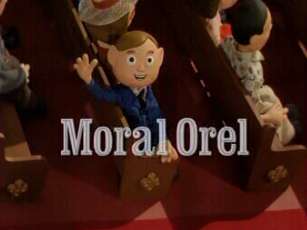 In the town of Moralton, Statesota lives the Puppington Family. Eleven-year-old Orel Puppington, a devout Protestant Christian, thinks of Jesus a his biggest role model. He always pays rapt attention in church, taking the advice of the local preacher's sermons to heart, but due to his age, he doesn't always understand some of the topics, which leads to Orel acting on them in his own special way. Needless to say, Hilarity Ensues!

Originally conceived as a satire of sitcoms from The Fifties and The Sixties, and designed to resemble an Affectionate Parody of Leave It to Beaver (not Davey and Goliath, despite the art style), Moral Orel ultimately evolved into one of the darkest pieces of western animation in years.

Every member of Orel's family shows some form of dysfunction: father Clay abuses alcohol, abuses Orel (emotionally), and fails to hide his closet bisexuality; mother Bloberta cheats on Clay, often finds herself depressed, and suffers from obsessive-compulsive disorder; and both parents spoil Orel's rambunctious little brother Shapey rotten. The population of Moralton (a town placed precisely in the middle of the United States) fare little better; most of Moralton's adults lead lives as dysfunctional as Orel's family -- if not moreso -- while putting on a show of being Good Christians and Good Neighbors.

Moral Orel is less a critique of Christianity itself than a Deconstruction of religious fundamentalism. The show aims its real critique towards authority figures who pay lipservice to their inferiors' religious beliefs as a way of preserving their authority -- especially when such people make horrible authority figures and role models.

The show served as an affectionate (and adult-oriented) quasi-parody of Leave It to Beaver until series creator Dino Stamatopoulos (aka Starburns) began to move the focus away from Orel midway through Season One. Dino began to explore the dark underbelly of the seemingly happy-go-lucky townspeople of Moralton, which culminated in the two-part Season Two finale "Nature": after getting drunk during a hunting trip with Orel, Clay shoots his own son in the leg, shattering Orel's innocence for good in the process.

The network higher-ups loved the two-parter, and bigwig Mike Lazzo asked Dino to make the show's third season as dark as humanly possible. Stamatopoulos complied, but Lazzo and Adult Swim instantly regretted getting exactly what they asked for: after a screening of the darkest episode of the show's run -- "Alone" -- Adult Swim cancelled the series and cut Season Three down to thirteen episodes, which forced several key arcs to be abandoned. (Dino did provide a sliver of hope admist the despair, however, with a happy ending for Orel.)

While the show was cut short, fans kept hope alive for a revival. After 2007, Adult Swim only played reruns of the show sporadically, but in late 2011, the network began rerunning the show in chronological order on weeknights. When Dino learned of this, he said "[if] enough people watch, there may be hope for a special or two" on a Facebook post. A month into the reruns, Dino made another comment: "Got a great call from the Head of Adult Swim yesterday raving about the ratings that the Moral Orel reruns have been getting. Great job, everyone! Keep watching and the Moral Orel special will be imminent." Dino followed up on this on Halloween with a surprise appearance from Orel in the last bump of a Mary Shelley's Frankenhole mini-marathon, where Orel said a new Moral Orel special would come "sometime in the near future". Beforel Orel, a special that explained "the origin of Orel's religious nature and the birth of his brother, Shapey", was aired in November 2012.

Tropes used in Moral Orel include:
Retrieved from "https://allthetropes.org/w/index.php?title=Moral_Orel&oldid=1894815"
Categories:
Cookies help us deliver our services. By using our services, you agree to our use of cookies.