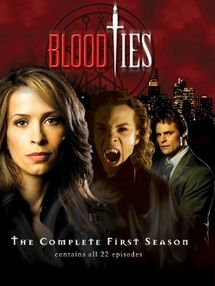 The series is based on the Blood Books by Tanya Huff. The leads are a private investigator, a vampire, and a cop. This show plays with and subverts several tropes of the Friendly Neighborhood Vampire genre: we are supposed to sympathize with Henry, but he isn't "friendly" in the conventional sense.

Strictly speaking though, Henry is the Vampire Sidekick of this equation. The actual lead is Victoria "Vicki" Nelson, a human PI and former cop, who's wound up specializing in cases from the unearthly side of the tracks. There is a Love Triangle between Henry, Vicki, and Vicki's New Old Flame (Police) Detective Mike Celluci, also human.

Tropes used in Blood Ties include:
Retrieved from "https://allthetropes.org/w/index.php?title=Blood_Ties&oldid=1911206"
Categories:
Cookies help us deliver our services. By using our services, you agree to our use of cookies.