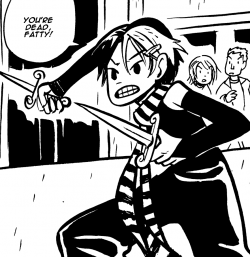 Knives Chau lives up to her name.

"Never let the crazy outweigh the hot."
—Regarding Mathilda, of MadWorld and Anarchy Reigns

This is someone The Hero used to be with, but broke it off. Said Ex is Not Good with Rejection.

You can expect the Ex to become a Stalker with a Crush. Many times, the Ex will become a villain because Love Makes You Evil. Despite the obvious gender differentiation in the title, it is not Always Female.

Oh and God help anyone our hero dated after this loon. They will suffer. Sometimes the hero will be targeted as well.

There are, at times, sympathetic Psycho Exes. Such as, if the break up was done because of the hero being a two-timing jerk at the time.

This is about the person who went nuts because of the break up.

Examples of Psycho Ex-Girlfriend include: