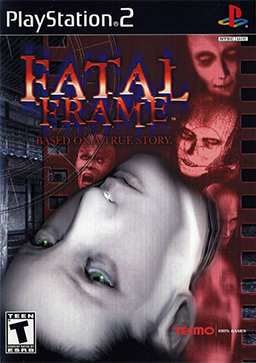 Known as "Zero" in Japan and "Project Zero" in Europe, Fatal Frame is a survival horror franchise consisting of four games, three of which are available outside Japan (though the fourth is now playable in English thanks to the Translation Patch). The first game is notable for being one of the few survival horror games rated below M for Mature. It's rated Teen for "Blood and Gore, Violence" (most likely because you don't actively cause it).

The protagonists' only weapon is a camera for destroying spirits.

The Fatal Frame series explores territory that not many other survival horror games have: ghosts. Furthermore, the protagonist of each game (usually female with a few exceptions) combats them using a special camera known as the "Camera Obscura". By taking photos using special film, the protagonist can exorcise the ghosts before they can harm her (via touch). The tension increases from the fact that in order to deal maximum damage to a ghost, you have to let it get as close as possible to you before taking the photo.

Games in this series include:

This game contains Blood, Gore, Violence and these tropes:

To top it off, you can decide to abandon her in the end and earn the worst ending for doing so. (One that doesn't even allow you a New Game Plus, but only gives you a horrible "Game Over" screen and that's it!)

Retrieved from "https://allthetropes.org/w/index.php?title=Fatal_Frame&oldid=1948010"
Categories:
Cookies help us deliver our services. By using our services, you agree to our use of cookies.