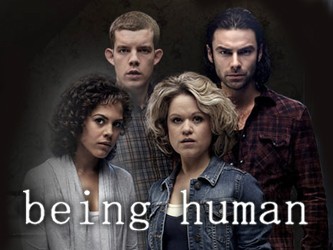 Being Human is a BBC Supernatural Soap Opera created by Toby Whithouse (of Doctor Who and Torchwood fame) about a pair of friends: Mitchell, a Friendly Neighborhood Vampire; and George, a geeky and uptight Wolf Man. They already work together, as a porter and cleaner at a hospital, but decide to get a place together, thinking that it will help them set up the routine and structure each of them needs to overcome their curses and live as normally as possible. However, on moving to a new house, they discover that it is haunted—by the ghost of a young woman called Annie, who has major confidence issues and is unclear on the circumstances of her death.

The Pilot aired to great reviews in 2008, as part of the rebranding of BBC Three. It was renewed for six episodes, despite initial misgivings on the part of the executives, because of the unexpected love for it.

The series was retooled, causing much fear in the people who loved the Pilot, but the changes that were made seem to be for the better.

The second series began filming in late summer 2009 and started airing in early 2010. It was eight episodes long, two more episodes than the first series. The third series, which incorporates a setting change from Bristol to Barry Island, Wales, aired in 2011. The fourth series remained in Barry Island, and finished airing in March 2012.

There's a Canadian-made remake, which re-sets the story in Boston. It started airing on Syfy in January 2011.

There is a web spin-off, Becoming Human and a fifth series has been scheduled for some time in 2013.

Not to be confused with the 1994 film of the same name. Or a Portal fanfic by Insane Guy of DOOM.

Tropes used in Being Human (UK) include:

Having become annoyed at being targeted by vampires following killing Herrick, George attempts to fight back in the first episode of series two. Sadly ineffective, and there was something unsettlingly desperate in it.

Also, the original concept of the series was about a recovering sex addict, someone with intermittent explosive disorder, and an agoraphobic. The vampires were more professional and upper-class, led by a business suit wearing, good humored Mickey Bricks, and had private get-togethers in expensive restaurants, reminiscing good-naturedly about being testaments of history. And how they're going to take over the world with blood and fang.

Retrieved from "https://allthetropes.org/w/index.php?title=Being_Human_(UK)&oldid=1779234"
Categories:
Cookies help us deliver our services. By using our services, you agree to our use of cookies.