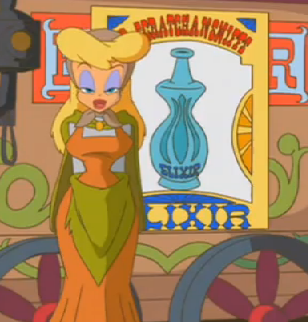 A woman in comics or cartoons doesn't have ribs like a real actress does. Thus she can easily have a far narrower waist than would be possible with even the strictest of corsets - and usually without even wearing one!

A woman with an Impossible Hourglass Figure has generous curves, with an impossibly narrow waist as an unproblematic part of how she just happens to look. Thus taking the classic "hourglass figure" beauty ideal Up to Eleven. She's always designed to be attractive, even in the cases where she's not Ms. Fanservice or Hello, Nurse!: Monsters with insect-like narrow waists does not count, even if the shape reminds of a hourglass.

For more realistic hourglass figures, see instead Of Corsets Sexy and Of Corset Hurts.

No real life examples, please; it's called an impossible figure for a reason.

Examples of Impossible Hourglass Figure include:

Retrieved from "https://allthetropes.org/w/index.php?title=Impossible_Hourglass_Figure&oldid=1874462"
Categories:
Cookies help us deliver our services. By using our services, you agree to our use of cookies.