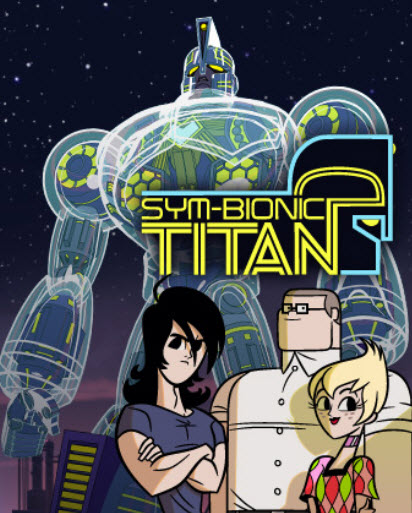 A hybrid of high school drama and giant robot battles, Sym-Bionic Titan follows the adventures of three beings from the planet Galaluna: Princess Ilana, her bodyguard Lance, and their Robot Buddy Octus. Escaping from their home from the advance of the powerful General Modula, they crash-land in Sherman, Illinois and pose as high school students. However, Modula's forces have followed in pursuit and now they must defend their new home from his many monsters with their mechs.

Sym-Bionic Titan was cancelled after its initial order of 20 episodes, ostensibly for not having a strong enough merchandising tie-in, though in actuality, was more of a contract dispute between Genndy and CN. The last three episodes were then shuffled to an early-morning slot on Saturday. The fast cancellation of such an acclaimed series has since quickly led to a fan movement determined on getting the show renewed.

Tropes used in Sym-Bionic Titan include:
Retrieved from "https://allthetropes.org/w/index.php?title=Sym-Bionic_Titan&oldid=1643065"
Categories:
Cookies help us deliver our services. By using our services, you agree to our use of cookies.