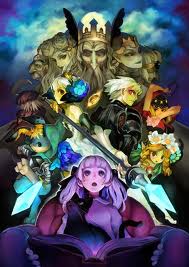 Odin Sphere is an Action RPG published by Atlus and developed by Vanillaware, released in the late end of the PlayStation 2's life cycle.

The game opens in an attic room, where a young girl named Alice is reading her grandfather's books, a series of stories about a magical world...

The nation of Valentine used to be a prosperous kingdom, until its greedy King held control over a magical relic called the "Crystallization Cauldron". He used it to conquer the nearby nations, but eventually lost control of it and watched as it destroyed his kingdom almost overnight.

Now, several other nations are fighting over the ownership of the Cauldron, and thus the world. The war is told through the separate viewpoints of five characters:

Aside from its multiple playable characters and connected story, Odin Sphere is notable for its high-quality 2D art (similar to Grim Grimoire, another Vanillaware game released that same year), in an age when almost all new games are being displayed in three dimensions. Many, many of the tropes, characters and plot devices in this game are inspired heavily by Norse Mythology, and especially Richard Wagner's Der Ring Des Nibelungen.

Tropes used in Odin Sphere include:
Retrieved from "https://allthetropes.org/w/index.php?title=Odin_Sphere&oldid=1899713"
Categories:
Cookies help us deliver our services. By using our services, you agree to our use of cookies.