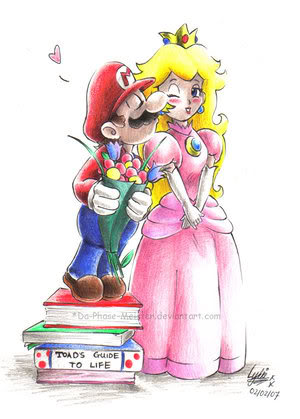 Mario and Peach: Defying stereotypes since 1985.

Men are usually bigger/taller than women, right? Well, most of the time, but there are cases in which a woman will be taller than her love interest, either because she's unusually tall or because he's unusually short. Sometimes it's both; sometimes the girl is a good deal wider than the guy as well. Generally the first example goes under Hot Amazon or a Statuesque Stunner, while the second goes in Big Beautiful Woman, Amazonian Beauty, or Abhorrent Admirer.

When this trope happens, the guy might feel self-conscious about dating a woman larger than him, or the girl might feel similarly insecure about dating a man much shorter/smaller than her (and let's not talk about if she wears heels...). But in other cases, the guy will find a woman attractive not "despite" how tall she is, but partly because of it.

Naturally, the Counter Trope of Huge Guy, Tiny Girl and One Head Taller. It may overlap with Hot Amazon, Statuesque Stunner, Amazonian Beauty, or Big Beautiful Woman. Masculine Girl, Feminine Boy is a Sister Trope, and the two are often found together.