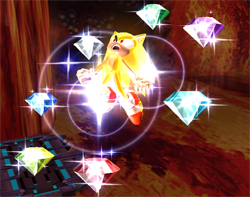 1-Up: Great job, Stinkoman! You got the Green Crystal Shard!


Stinkoman: Will we ever find all the colors before the bad guy?
—Homestar Runner

A long time ago, several magical items were created. What were these amazing planet-destroying-if-ever-found-by-the-Big-Bad artifacts? Jewels, of course! They're shiny and glowy, and geometric, and crystalline. And let's not forget the allusions to wealth and regency.

Every super powerful Plot Coupon has to be a diamond or gem of some sort. Bonus if it's been somehow shattered into easily re-assembled pieces. And you, our heroes, in all likelihood Gotta Catch Em All. Bonus bonus points if there's a Full Set Bonus. Or just the one in the case of the Crystal Prison. If there are more than one gem, they'll usually be conveniently Colour Coded by their Elemental Powers, although sometimes they're only different colors because it looks cool.

That is, cut and polished Green Rocks. You can even slap them on just about anything to give them a power boost... or just to look neat!

Note that while Alliteration made the name of this trope inevitable, many examples of this trope aren't actually MacGuffins because they serve a real purpose beyond being the object of a quest. They might not even be made of minerals in the case of Body to Jewel, and the purpose may be exposition in the case of Data Crystal.

There's probably an entire subtrope one could write for plots in which it turns out the villain wants a jewel not for its monetary value, but because it's necessary to focus the beam of a giant frickin' laser. Such gems can even be plucked straight from a mine wall and put into said laser thanks to their All-Natural Gem Polish.

Examples of Mineral MacGuffin include:

The red heart of the night it is, strong to save or to damn. It came from afar, and from long ago. While I held it, none could stand before me. But it was stolen from me, and Acheron fell, and I fled an exile into dark Stygia.

Above all, why had Ka-nu shown him the green gem of terror, stolen long ago from the temple of the Serpent, for which the world would rock in wars were it known to the weird and terrible keepers of that temple, and from whose vengeance not even Ka-nu's ferocious tribesmen might be able to save him?