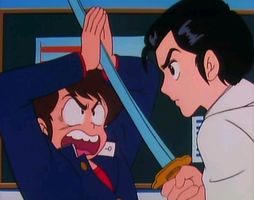 Stopping a razor-sharp blade requires only your hands... at least in a cartoon.

No sword on hand, and about to be slashed? No problem! Reach out and Clap Your Hands If You Believe... you can stop a blade barehanded, presumably by applying friction to the sides. At the extreme end are characters capable of stopping a blade between two fingers or—if Made of Iron—simply bouncing the blade off their finger or arm, though this trope is typically based on technique rather than invulnerability (which would render any defense superfluous).

A common trope in Manga and Anime, it is known in Japan as Shinken Shirahadori,[1] which is part of Martial Arts training. The Real technique, however, does not actually involve blocking the sword with a bare hand, but preventing the opponent from drawing his sword. Well, nobody in Japan probably was stupid enough to catch a sharp blade in his hands, especially as swords in Japan were forged with the purpose of making a clean strike to an enemy.

Its impossible nature made it one of the Tropes Busted By Myth Busters, as the best-case scenario would end up with a large chunk of a hand sliced off, assuming one had enough speed and force to stop the blade coming down. Most likely one would get a sword in the head anyway. However, a trained martial artist using hand protection like the metal grips used to help climb walls could pull this off with (depending on size) the appearance of doing it barehanded.

In the end, though, the best option would be the DODGING the damn blade. Especially if the user is fast enough both mentally and physically to pull this off right... or even better, just run like hell if your enemy had a blade while you were bare-handed.

If done almost right, and the user retains their hand, don't be surprised by a Bloody Handprint to emphasize the injury. Characters may need to enter a Meditation Powerup to be able to catch the blade.

Bullet Catch and Punch Catch are counterparts for Gun Counterpart and Good Old Fisticuffs respectively, as this trope is roughly "Sword Catch". Also compare Point That Somewhere Else.

Examples of Barehanded Blade Block include:

Retrieved from "https://allthetropes.org/w/index.php?title=Barehanded_Blade_Block&oldid=1930552"
Categories:
Cookies help us deliver our services. By using our services, you agree to our use of cookies.