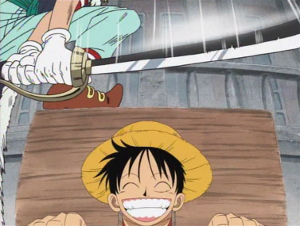 Death is rarely a cause for celebration, as it is a permanent goodbye to the world you love.

Sometimes, however, the pain of seeing you cry hurts the one who is about to depart more than imminent death itself, and in spite of agonizing pain or being crippled beyond saving, summons up all their courage to sincerely smile one last time for you (or alternatively laughing); a final gesture that beyond all doubt affirms their love for you. If the one smiling in question is a girl (especially if she is an Anime or Video Game character), her final smile will be the single most painfully cute thing you will ever see besides a box of kittens.

It makes a lasting impression as a pretty dignified way to go. Usually reserved for the finales of Tear Jerker stories or the climax of a Bittersweet Ending; Let Them Die Happy is when someone intentionally deceives someone so that they will do this. See also Final First Hug and Last Kiss. Sometimes crosses with Out with a Bang. Unless the body dissolves or is destroyed, usually results in Peaceful in Death.

The Mercy Kill may have the dying person evince some self-awareness to show this; similarly, this might be part of Dying as Yourself.

Compare Died Happily Ever After. When She Smiles is this trope without the death. Contrast Tearful Smile. Often paired with Pietà Plagiarism and Cradling Your Kill.

NOTICE: It is highly likely that simply reading through the examples will be a Tear Jerker for the reader. It is recommended that a box of tissues be handy.

Examples of Go Out with a Smile include:

Retrieved from "https://allthetropes.org/w/index.php?title=Go_Out_with_a_Smile&oldid=1958385"
Categories:
Cookies help us deliver our services. By using our services, you agree to our use of cookies.