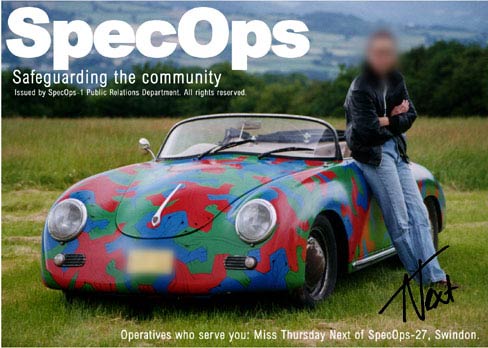 Thursday Next lives in an Alternate History. In her world, Time Travel, cloning, and genetic engineering are commonplace; resurrected dodos are the household pet of choice. The obscenely powerful Goliath Corporation, which nearly singlehandedly reconstructed England after World War II, now runs the country as a virtual police state. And literature, particularly classic literature, is very, very, very Serious Business. Writers are revered with nearly spiritual devotion, controversial claims about books and authors can be criminal, and an entire police squad, the LiteraTecs, exist to keep the literary scene in order. Thursday works for just such a unit in Swindon, with her friend and colleague, the exceedingly polite Bowden Cable.

In an effort to rescue her mad inventor uncle Mycroft from international arch-criminal Acheron Hades, a gleefully-evil genius with supernatural powers, Thursday discovers the BookWorld, a fully self-contained world that exists within the pages of all works of literature, where all literary characters live. They're self-aware, acting out their roles when a person reads a book but chilling out and living their own lives as soon as they close it. the Great Library is governed by the Council of Genres and kept in line by Jurisfiction, another police force whose task it is to make sure the plot of every book stays the same every time someone reads it.

Such is the universe of Jasper Fforde's meta-fictional masterpiece, the Thursday Next series. The author hangs a lampshade on everything and anything relating to classic literature, the tropes of police fiction and spy fiction, and even the relationship between a work of fiction and its audience. Heavy on wordplay and puns, the series deals with the tireless heroine's adventures balancing her work as an agent of Jurisfiction in the Great Library and LiteraTec in the outside world, to say nothing of her responsibilities as a wife and mother.

The books in order are:

In addition, there is an Un Installment known as The Great Samuel Pepys Fiasco between the fourth and fifth/sixth books, which is implied to have happened but does not exist.

The books play with post modern ideas, and toy with the fourth wall, noting how things are written, or their own style. It plays up literary tropes, and their difference with the world. Fictional characters tend to be Genre Savvy, but accepting of the issue. A lot of the action takes place in the Bookworld, where stories are assembled and regulated from behind the scenes, leading to various oddities.

Jasper Fforde has also written the Nursery Crime series, which employs many of the same ideas and has a similar style. (The connection between the series is explained in great detail in The Well of Lost Plots.) In this world, Genre Savvy detectives try to deal with suspicious goings-on, often involving Nursery Rhyme characters while trying to be both efficient and readable. This is a world where it's customary for Da Chief to suspend a detective at least once a case, and detectives gain credibility for having novel cars, lost loves, and drinking habits.

The following tropes are common to many or all entries in the Thursday Next franchise.
For tropes specific to individual installments, visit their respective work pages.
Retrieved from "https://allthetropes.org/w/index.php?title=Thursday_Next&oldid=1930061"
Categories:
Cookies help us deliver our services. By using our services, you agree to our use of cookies.