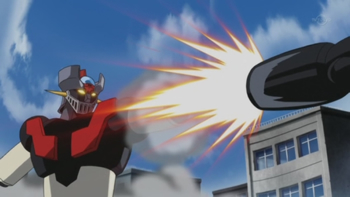 Or, if you're watching the Trope Maker, "ROCKETTO PANCHI!"

The Humongous Mecha isn't so much a speculation of practical weapon design as a convenient visual metaphor for the character(s) who pilot it. Steed, sword, and shining armor in one unified package. Extending that metaphor, it may be more satisfying if the hero's final blow for justice is dealt with "his" own right hand across the villain's jaw.

Problem: Said villain is half a mile away, and flying.

Solution: Fire your forearm (usually down to or just below the elbow) like a missile!

Problem solved. Don't forget to tell everyone what you're doing, though. And be sure you don't miss; large-scale Rocket Punches tend not to have retrieval mechanisms.

THE most famous Super Robot weapon, even more so than drills. So much so that many old Super Robot toys would include a firing-fist gimmick even if the actual show never used it.

Examples of Rocket Punch include: