Everything About Fiction You Never Wanted to Know.
(Redirected from Cute Shotaro Boy)
Jump to navigation Jump to search 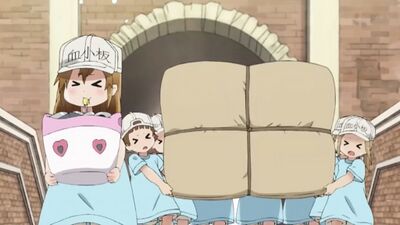 This kid is barely past puberty—if that old—but acts as if always preoccupied with responsibility. He (or she) works hard at whatever he does and treats things seriously, but every once in a while he does indeed act like a kid (and hates the subsequent teasing). Usually not taken too seriously by anyone and hates being treated like a kid by adults, even if they secretly like the attention.

Often his family situation is problematic, although he may have a big sister or brother he respects and admires. Said sibling may not appear (letting the audience take that role) and the Adorably Precocious Child can attach to the closest adult who lets him—this is especially common if he's also a Mouthy Kid. Sometimes this works in reverse, and the adult character may have to defend himself against unwholesome comments by other characters by insisting they're Like Brother and Sister, or, alternately, Older Than They Look. If they grow up, they're likely to become hot, especially if they had a Hot Dad or Hot Mom, due to the Generation Xerox effect.

Examples of Adorably Precocious Child include:

Retrieved from "https://allthetropes.org/w/index.php?title=Adorably_Precocious_Child&oldid=1899471"
Categories:
Cookies help us deliver our services. By using our services, you agree to our use of cookies.