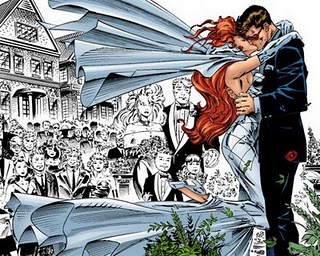 —William Shakespeare, Much Ado About Nothing, slightly Woolseyized

Will They or Won't They? Well, They Do.

The conclusion of a Romance Arc with a Happy Ending. The point where we are finally done with breakups, misunderstandings and second thoughts. If the story is done with them, they live Happily Ever After. If it isn't, when the rest of it happens to them they'll have each other. Give them enough time, and they'll likely be Happily Married by then.

Unless the story decides to start up a whole new string of complications from scratch somewhere in the far future, they finally get to catch a break. And chances are they had to go through a lot to earn it.

If there has been an engaging "will it work?" plot up to this point, a They Do can induce a variation of Shipping Bed Death (or, of course, it can induce the standard brand if it doubles as a Relationship Upgrade)- in which case, cue a last second split up, one party getting run over by a bus or some other malarkey. Writers may try to avert this by segueing into a new kind of story- shifting the focus to a newer couple to keep the old romance plots open, or using the stable relationship to open up fresh new avenues for comedy, drama and adventure.

Contrast with Maybe Ever After, which is when a romance arc ends without clearly confirming whether or not They Do.

Examples of They Do include: