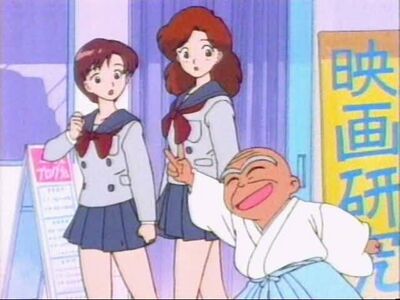 Something about aging shrinks people. Maybe it's the effect of old age on posture, or cartilage compression, or maybe it's just how kids these days shoot up like beanpoles with how much they eat. Either way, most senior citizens -- especially the skilled, powerful ones that can kick the crap out of younger folk—are rarely over three or four feet tall.

In real life, there is basis for shrinking in scientific lore. Except in cases of severe osteoporosis, however, most people will only lose a couple of inches from their tallest height over their lifetime. Note, however, that each generation has been, on average, taller than the last throughout the 20th century even in the west thanks to heartier diets rich in protein that their peasant ancestors could not enjoy, while Japan in particular (and Asia in general) is currently going through an accelerated version of this phenomenon since the end of World War II. Taller people tend to have shorter lifespans, which accounts for elder characters in general being shorter, but not individual height loss.

Since this tends not to be noted as anything peculiar by younger characters, it's also an instance of Cartoonish Companions.

Examples of Miniature Senior Citizens include:

Retrieved from "https://allthetropes.org/w/index.php?title=Miniature_Senior_Citizens&oldid=1913728"
Categories:
Cookies help us deliver our services. By using our services, you agree to our use of cookies.