Even the Girls Want Her 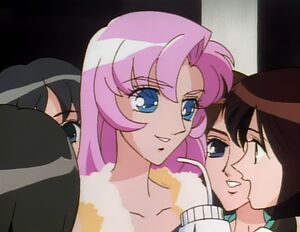 Now imagine what the guys think of her.

When a guy is so studly and great that he inspires worship and desire in both women and men, it's Even the Guys Want Him. But when a female character's female fan club matches or exceeds her male fan club, you've stumbled upon the slightly rarer but still prominent Distaff Counterpart: Even the Girls Want Her.

Mostly an Anime trope (especially in Girls Love works), the "her" in question is often an aloof-seeming, athletic high school student who is pursued by every sports club in school, and has the guys crooning "So hot!" as she goes past, and the girls squealing "So cool!" as she goes past (none of these are a hard-and-fast requirement, but most of the examples will pick and choose at least one or two items off the "menu" of aloofness, athletic ability, and "cool" beauty). She will often get chocolates from other girls on Valentine's Day (which is Serious Business in Japan)

This illustrates the major difference between the gender versions of this trope. The male "admirers" in the case of Even the Guys Want Him often mingle equal amounts jealousy, anger, or frustration into their admiration, often due to Stupid Sexy Flanders. But perhaps due to the concept of the Romantic Two-Girl Friendship, the female admirers in the case of Even The Girls Want Her rarely display any negative connotations to their admiration (or attraction). They'll follow the cool girl around like a pack of lovesick puppies, and never think twice about it. The Love Interest of said girl (be male or female) might be more likely to elicit said reactions, though, but that's a case-by-base scenario.

Though in some versions, there may be a bit of the Double Standard at work in why females don't seem to bother feeling bad about their crushes or attraction to other girls. In most of the western world, to a great extent a girl finding another girl attractive is "hot", while a guy finding another guy attractive is "totally gay, dude". May have something to do with female attraction being seen as more "pure" or emotionally and/or intellectually based, while of course men just want to jam it in.

This refers specifically to otherwise straight women and girls falling for a woman; if her admirers already liked the ladies, it doesn't count.

May overlap with Bifauxnen, Cool Big Sis, The Fashionista, Onee-Sama, (sometimes) The Ojou, Tall, Dark and Bishoujo, and Hot Amazon.

If her "admirers" include much younger characters as well as both sexes, she may be a Stacy's Mom. If the character is intersex, then it becomes Everybody Wants the Hermaphrodite.

Examples of Even the Girls Want Her include:

Retrieved from "https://allthetropes.org/w/index.php?title=Even_the_Girls_Want_Her&oldid=1920344"
Categories:
Cookies help us deliver our services. By using our services, you agree to our use of cookies.