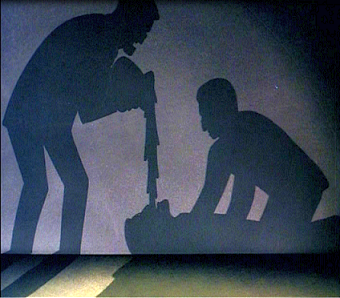 Let's give him all he'll EVER need!

Moral Guardians really do not like kids seeing things like violence, torture, death, or creepy transformations straight up. So Animated Series tend to get around that by alluding to them. A shadow thrown by the events the Moral Guardians would not want showed directly is all the viewer gets to see. Sometimes there's a witness standing in the shadow looking shocked, horrified, disgusted, etc.

Sometimes it is a dodge for a live-action or other movie, because the imagination of the audience/viewer will do all the real work. Also, it is sometimes better to imply through shadowplay than to use an actual shot because the special effects will not be sufficient to uphold the Willing Suspension of Disbelief ... or it is simply too difficult to render safely with real actors. In Crime and Punishment Series, it is also useful as a way to keep the murderer's identity hidden.

Least frequently, it is a cue to the viewer and characters within the work that something is off about the person whose shadow we are viewing; a Living Shadow perhaps.

The trope is all but absent in literature, as the reader's imagination is doing all the work anyway.

Compare and contrast with Gory Discretion Shot and Sound-Only Death. Played for laughs or deception, you end up with Big Shadow, Little Creature.

Examples of Shadow Discretion Shot include:

A Shadow Discretion Shot of Pegasus gaining the Millennium Eye, complete with his screams of agony, however, was not cut from the dub, though the blood was removed when we looked back at his face.
Also used in a flashback episode showing how Yuugi's grandfather found the Millenium Puzzle, when his companion betrays Yuugi's grandfather, shooting him and attempting to steal the Puzzle, the tomb's curses summon up an insect monster that dismembers and eats him, showing only the shadow of this happening (though we still get to hear it just fine)

Parodied in Woody Allen's Take the Money and Run, when it's revealed that the shadow itself is what's being whipped.

They also quite literally invert the trope in "The Storm". We get a bright light discretion shot, due to Ozai's firebending move to scar Zuko at the Agni Kai. The viewer sees the firelight playing on the faces of the crowd, plus Iroh's reaction of horror and dismay between the smiles of Zhao and some kid we've never seen before. What the viewer hears is another story.