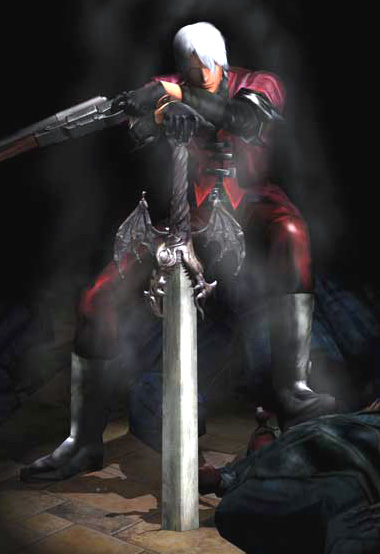 Dante the Demon Slayer, as he appeared in the original game.

Thousands of years ago, demons were invading the human world through a tower known as Temen-ni-Gru. Fortunately for humanity, a powerful devil named Sparda "woke up to justice" and kicked ass, sealing away Mundus, the demons' leader, and their world. It's never explained why he didn't just kill Mundus; the implication is that Mundus is literally unkillable. At any rate, he seals up his own power and takes human form for many more years, eventually fathering the halfbreed twins Dante and Vergil with the human woman Eva. Then he dies mysteriously. And Eva gets killed in a demon attack, but not before Dante hides and Vergil escapes.

Fast forward ten years. Vergil has joined up with a strange, bald wizard named Arkham and raised Temen-ni-Gru again in the hopes of gaining more power. It's Dante's job to go in and kick ass, which he does. This is the plot of Devil May Cry 3: Dante's Awakening (2005). Arkham dies, Vergil falls into the depths of the demon world and Dante, at the suggestion of his sometimes-ally, the huntress Lady, names his demon-hunting business Devil May Cry.

Some time later, in the first Devil May Cry (2001), Trish, a demon who looks like Dante's mother, bursts into his shop and "invites" him to Mallet Island to prevent Mundus from returning. He accepts, kicks ass and seals Mundus away again, although he still doesn't succeed in killing Mundus. Trish becomes Dante's sidekick.

Some more time passes, and Dante has gone (mostly) silent. He's called to the remote Dumary Island to investigate a corporation seeking demonic power, which he does, and he kicks ass. That's Devil May Cry 2 (2003).

Even more time passes and the focus of Devil May Cry 4 (2008) shifts to newcomer Nero, part of a Sparda-worshiping cult known as the "Order of the Sword", whose party gets crashed by Dante. Demons attack the city of Fortuna soon afterward and Nero has to kick ass. In process, he discovers that his higher-ups are Not So Different from the demons he fights but The Reveal comes too late and Dante has to take action and kick ass too in order to rescue him. Nero then kicks more ass and saves his kidnapped girlfriend Kyrie from the bad guys. Cue True Love's Kiss (well, almost).

Basically a series of American-style action films in video game form, these are among the best examples of Action Games in recent memory. Be warned, however, except for the second one, they're really, really hard. It's Real Difficulty though.

A new game has been announced, and it's an Alternate Continuity known as DmC: Devil May Cry (2013) under the development of Western Developer Ninja Theory, the creators of Heavenly Sword and Enslaved: Odyssey to the West. Current previews seen so far seem to imply the game is going for Darker and Edgier with Dante shown scowling, dark-haired with patches of white (and scrawny) with a fondness for smokin' a cigarette, as well as shots of him being imprisoned and interrogated in an grungy asylum. So far, the fan outcry has varied from Ruined FOREVER to They Changed It, Now It Sucks. The fact that Ninja Theory's previous work (and likely dry-run for this title) Enslaved bombed hard (despite getting pretty good reviews) does not soothe fan anxieties in the slightest.

Then, there is the 2007 anime series called Devil May Cry: The Animated Series which follows Dante's adventures between the first and fourth games. Also has two novels that directly precede the installments they are named after, a two-volume novelization of the fourth game, and a three two-volume manga somewhat preluding the third game. [1]

Meanwhile, in 2011, Dante, Trish and Vergil made their way to the roster of Marvel vs. Capcom 3 (Dante and Trish in the original release, Vergil in the Ultimate Updated Rerelease). They have all been warmly received. Later, Dante was added to the Capcom stable in Project X Zone (partnered with Demitri Maximoff).

In the Microsoft 2018 E3 conference, Devil May Cry 5 was announced. It was released in 2019 as a return to form for the original timeline. Nero, now running a branch of Devil May Cry, is assailed by a hooded stranger and literally disarmed, having to collaborate with Gadgeteer Genius Nico to get replacements for the Devil Bringer in the form of mechanical Devil Breakers. He and Dante get hired by V, the enigmatic new third player character who relies on strangely familiar summoned demons to fight, to confront the assailant, now known to be demon king Urizen, who has raised a demonic World Tree in Red Grave City as part of his plans to prey on humanity.

Retrieved from "https://allthetropes.org/w/index.php?title=Devil_May_Cry&oldid=1954679"
Categories:
Cookies help us deliver our services. By using our services, you agree to our use of cookies.