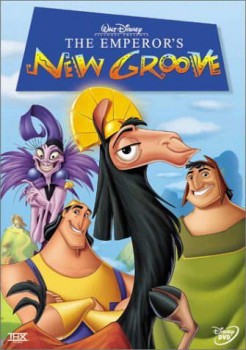 A very atypical animated movie from Disney. Hugely self-aware and a lot more naughty than most of the studio's canon, The Emperor's New Groove is a film that trolled the deepest levels of development hell and finally emerged as a spoof of a parody of its original concept. Very loosely based on "The Emperor's New Clothes" by Hans Christian Andersen, it's well-loved, but probably not intended for Disney's youngest fans.

Kuzco (David Spade) is the spoiled teenaged Emperor of a mountainous jungle nation (based loosely on the ancient Incan empire of South America). On the eve of his eighteenth birthday, he becomes the target of an assassination attempt by his incredibly ancient advisor Yzma (Eartha Kitt) and her borderline idiot-savant lackey Kronk (Patrick Warburton), after he unceremoniously fires them from their high-profile jobs. Their plan fails, and Kuzco is accidentally turned into a llama. He's forced to team up with burly and good-hearted peasant Pacha (John Goodman) on a dangerous trek through the jungle to reclaim his throne — while Pacha tries to teach Kuzco just a little bit of humility in the process.

The film has no love story apart from Pacha and his very pregnant wife, only two significant songs (one performed by Tom Jones and one by Sting), and the spurned would-be cute animal sidekick vengefully attempts to get Kuzco eaten by a pack of jaguars. As you can see, this all plays out more like a classic Warner Brothers cartoon than a typical Disney flick, though it was successful enough to spawn a (significantly less well-received) made-for-video sequel and then a TV series.

It's irreverent, hilarious, and provides several example-quotes here on All The Tropes. In addition, it was extremely well-received by critics, but this sadly wasn't enough to save it from being a box office failure. However, the film has garnered a new lease on life in the post-Shrek world as an example of how to do a timeless animated comedy right — many of the gags aged far better than the heavily modern pop-culture based humor of Shrek and its knock-offs, and the character of Yzma is now viewed as one of the best Disney villains.

Tropes used in The Emperor's New Groove include:
Retrieved from "https://allthetropes.org/w/index.php?title=The_Emperor%27s_New_Groove&oldid=1861474"
Categories:
Cookies help us deliver our services. By using our services, you agree to our use of cookies.