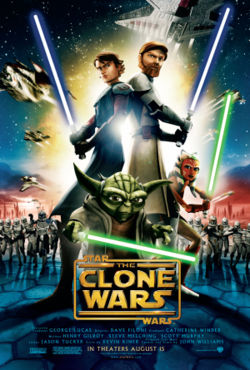 A CG-animated film and television series set in the Star Wars universe, covering the period between Episode II and III. The film was released in the United States in August 2008. The TV series debuted on Cartoon Network in fall 2008, where it remained until moving to Netflix for its sixth season in 2014. It was later soft-rebooted and moved to Toon Disney after Disney's acquisition of the Star Wars properties. It got a revival with a seventh and final season on Disney+ in 2020, which eventually leads into the events of Episode III.

It is easy to confuse this series with Star Wars: Clone Wars, Genndy Tartakovsky's 2003 mini-episodic Animated Series, which also aired on Cartoon Network, and covers the same time period. The Clone Wars, while having no writers in common, borrows many design and plot elements from its predecessor. George Lucas is a producer, while Dave Filoni (known for his work on Avatar: The Last Airbender) is director and head writer.

The film began development as a three-part pilot episode arc for the series, but was converted into a Compilation Movie after Lucas screened the episodes himself. The movie was generally panned by critics, and subject to fan backlash, but being a Star Wars production, was still financially successful.

The series itself has been better received, likely because it is shown in the medium for which it was intended. A major advantage of the television format and choice timeslot is the inclusion of PG-13 level content. Characters are killed in unsettling and dramatic fashion, and some adult language and mild sexual content have slipped in under the radar. Like Clone Wars, episodes feature more obscure Jedi, stories centered entirely around Clone Troopers and sometimes even the Politicians. There is also a set of novels set during the events of the series.

The series was designed in an anthology format, with Anachronic Order as a very intentional stylistic choice. Each season there is a loosely connected Story Arc (most two or three part episodes) while the "Filler" tends to jump around to any point in the timeline. This has resulted in some Story Arcs being told almost in reverse.

For the unfamiliar, the Clone Wars was a period in Star Wars history that was the result of "Separatists" leading a rebellion against the Galactic Republic. The Republic didn't have a unified military and the Separatists were well financed with a droid army. But it was revealed in Episode II: Attack of the Clones that a secret conspiracy gave the Republic a fully stocked and trained clone army, which served to stretch out the war.

The Jedi serve as the generals of the war, with their own legion and loyal clone commanders. Anakin Skywalker is forcibly given a Padawan, Ahsoka Tano, and they deal with the various battles and adventures fought during this epic war. If you've seen Episode III: Revenge of the Sith (which is set three years after Attack of the Clones), you know how this war ends.

Tropes used in Star Wars: The Clone Wars include:
Retrieved from "https://allthetropes.org/w/index.php?title=Star_Wars:_The_Clone_Wars&oldid=1964514"
Categories:
Cookies help us deliver our services. By using our services, you agree to our use of cookies.