A Troll in Central Park 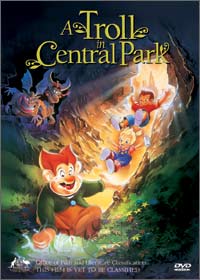 An animated film made by Don Bluth.

Stanley is a weird troll. He is kind, he is gentle, he loves flowers, and he has a literal Green Thumb that makes plants (talking, dancing, singing plants, to boot!) grow wherever he touches. As punishment, instead of just turning him to stone, the queen of the trolls decides to banish him to a place that is a nature lover's worst nightmare -- New York City! While hiding out in Central Park, he meets a boy and his little sister and takes them on an adventure that's 50% Tastes Like Diabetes and 50% Nightmare Fuel.

All in all, a very strange ride.

Tropes used in A Troll in Central Park include:
Retrieved from "https://allthetropes.org/w/index.php?title=A_Troll_in_Central_Park&oldid=1750729"
Categories: