Everything About Fiction You Never Wanted to Know.
(Redirected from Omake)
Jump to navigation Jump to search 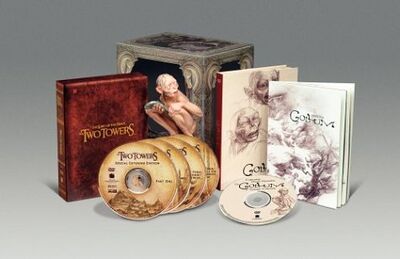 And you thought you were just getting a movie.

A bonus that is added to, but separate from, a particular work. The practice of adding such a bonus to one's work has been around for a long, long time: Charles Dickens, for example, was a regular practitioner of it, back when he wrote his stories for newspapers and magazines.

If this extra material is another story in the universe, it generally doesn't interact with the primary plot of the work, and is seen as "stand-alone" material. Some times that extra material isn't even considered canon, though such additions can add depth and insight to the primary characters if the writer makes an effort to connect the "extra" to the main material.

Other kinds of extras are "making of" featurettes, outtakes, deleted scenes, concept art, Feelies and others.

Nearly all types of media feature extras: artwork is popular for anime and manga, particularly holiday art (especially if the artists can draw the ladies in Sexy Santa Dresses); musicians regularly add "Hidden Tracks" to their records; television producers create extra scenes to be shown over the credits or as online-only "webisodes"; movie producers sometimes create whole new short films, just to add as an "extra" on the DVD, although nowadays Picture Dramas also often fulfill that role; and comic books often feature "backup stories" that are only a handful of pages long. DVD Collector's Editions often come with a reproduction of a prop or another similar bit of memorabilia.

"Omake" is the anime fanspeak term. "Lagniappe" is a Louisiana Creole word commonly used by chefs that means "a little something extra".

Examples of Bonus Material include:

Retrieved from "https://allthetropes.org/w/index.php?title=Bonus_Material&oldid=1951660"
Categories:
Cookies help us deliver our services. By using our services, you agree to our use of cookies.