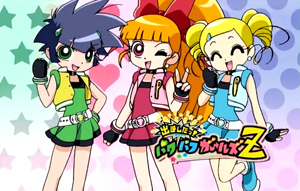 Demashita! Powerpuff Girls Z ("And away they go! Powerpuff Girls Z") is a Japanese Anime adaptation of the American cartoon The Powerpuff Girls. It turns Blossom, Bubbles, and Buttercup into Magical Girl Warriors, complete with elaborate Transformation Sequences that hover somewhere between homage to and parody of the Magical Girl genre. Originally announced on April 1, 2005, which led many fans to believe it was an April Fool's joke, but the show premiered for real on July 1, 2006.

The storyline indicates that this is very much an Alternate Continuity from the American version, starting right from the girls' origin: Professor Utonium's son Ken uses a "Chemical Z" beam to destroy an iceberg that has mysteriously appeared in Tokyo City (as opposed to the original's "Chemical X"), causing an accident that grants superpowers to three unrelated thirteen-year-old girls -- Momoko Akatsutsumi (codenamed "Hyper Blossom" in her powered form), Miyako Goutokuji ("Rolling Bubbles"), and Kaoru Matsubara ("Powered Buttercup").

Many of the original Powerpuff Girls Rogues Gallery make a re-appearance here, although Mojo Jojo is now a normal monkey turned Mad Scientist by Chemical Z, bent on seeking revenge against humanity which mistreated him. Instead of translating the convoluted speech pattern the original character used into a nigh-incomprehensible Japanese version, he has a Verbal Tic and ends every sentence with "Mojo".

The series was made due to the refusal of major Japanese networks to air the original series, which was very popular on cable, since it wasn't produced in Japan.

Tropes used in Demashita! Powerpuff Girls Z include:
Retrieved from "https://allthetropes.org/w/index.php?title=Demashita!_Powerpuff_Girls_Z&oldid=1916031"
Categories:
Cookies help us deliver our services. By using our services, you agree to our use of cookies.