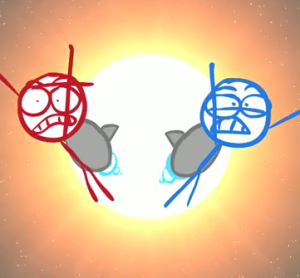 Normal day with Red and Blue.
Dick Figures is a web series from the mind of Mondo Media. It centers around the normal daily lives of two stick figures, Red and Blue.

Tropes used in Dick Figures include:

Episodes of this series provide examples of:

Retrieved from "https://allthetropes.org/w/index.php?title=Dick_Figures&oldid=1927987"
Categories:
Cookies help us deliver our services. By using our services, you agree to our use of cookies.