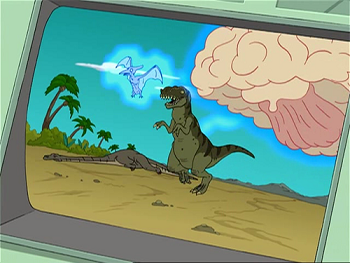 The mystery is forever solved

While writing a story, an author needs a way to show how bad things would get if the Big Bad took control or the Applied Phlebotinum blew up. So the author attributes some historical disaster to their plot. And what's the biggest disaster one can imagine?

Why, none other than the extinction that wiped out the dinosaurs, better known as (depending on the source) either the K-T[1] or the K-Pg[2] extinction in paleontological terms. Not only did this extinction wipe out almost two-thirds of all life on Earth and dethrone the dinosaurs, it also set the stage for most of the modern ecosystems we see today. The extinction did this by making the planet a giant hellhole.

Despite being confirmed with a huge degree of certainty and consensus to be some kind of asteroid impact, debating has made the K-Pg extinction ideal for the sheer amount of theories as to why the dinosaurs died out; rivaling that of Who Shot JFK?. What's one more crazy theory going to hurt?

Ironically, most writers tend to ignore the Permian extinction, a mass extinction even bigger than the one that wiped out the dinosaurs. Because, you know, dinosaurs are cool.

A subtrope of Historical In-Joke. Compare Somewhere a Paleontologist Is Crying, which this trope can fall into if not done well. Contrast with Lost World, where the dinosaurs manage to duck and cover in a cave/valley/jungle before the big event.

Examples of Phlebotinum Killed the Dinosaurs include:

Retrieved from "https://allthetropes.org/w/index.php?title=Phlebotinum_Killed_the_Dinosaurs&oldid=1864347"
Categories:
Cookies help us deliver our services. By using our services, you agree to our use of cookies.