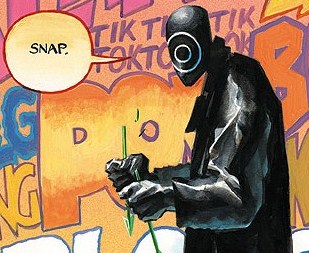 "Yawn! You see, I say 'yawn' because when I actually yawn, you don't get it."
—Jordan, Scrubs

There are many words that are commonly used this way. For example:

The Japanese also have many common words as well as some for actions that don't make sound.

See Unsound Effect for the reverse trope, and Reading the Stage Directions Out Loud for a related one.

Examples of Saying Sound Effects Out Loud include:

Kotetsu: ... And I went flying, like WHOOSH!, and then I was all BOOM and BANG!

Max Shreck: "Does it really matter who's mayor?"
Bruce Wayne: "It does to me."
Max Shreck: "Yawn."

Mr. Krabbs: "You've got to keep a sharp eye out for paying customers!"
Squidward: "Yawn."

Xander: Have you seen Ampata?
Willow: * makes indistinct movement while wearing thick fur coat*
Xander: What was that?
Willow: I shrugged.
Xander: Next time you should probably say "shrug." * leaves*
Willow: "Sigh."

Detective Manners: Well that's a dead bleepin' alien if I ever bleepin' saw one.

"Hey guys, I think they're playing our tune, the Ahwooga Waltz! Anyone care to join me in a quickstep?"

Larxene: Ching-battle!
Ansem: Okay, that's so not a sound effect.

Delaine: DON'T CORRECT ME ON MY GODDAMN-- * shlunk*
Both: * look down* "Shlunk"?
Kyran: * holds up stabbed hand* Whoopsies.

Xykon: Gosh, minions, don't let any of those big scary adventurers touch my poor little gate, located to my left with significantly less guards than the rest of the room. Just a touch would destroy it. Wink, wink.
Redcloak: Sir, I hardly think that is going to accomplish anything.
Xykon: You'd be surprised.
Redcloak: Sir, you actually said the words, "wink, wink." I mean--

Deadpool: Poof! What did that low-budget sound effect mean?

Sylvester: Are we men, or are we mice?
(unnamed smallest cat): I like cheese!
Sylvester (while smacking the other cat): SMACK!

Dan: WHAT'S THAT? You're breaking up! Crackle, crackle! Buzz!
Elise: You're not even making good noises. You're just saying crackle, and buzz!
Dan: Crackle! Buzz! *hangs up*