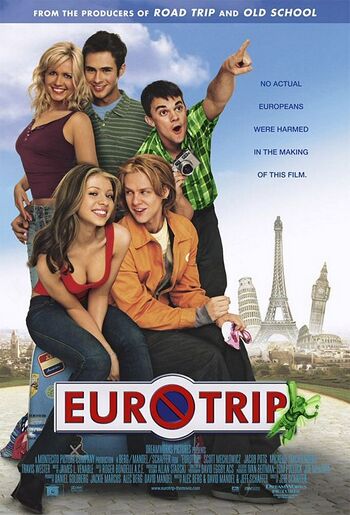 One of the last teen sex comedies to come from the late 1990s, early 2000s boom. Scotty gets dumped by his girlfriend on graduation. He then goes on a trip to Berlin to meet his German pen pal Mi(e)ke (pronounced Mee-kah, a German feminine name nach Deutschland) and declare his everlasting love for her. He is accompanied by his sassy friend Cooper and "worst twins ever" Jenny and Jamie. There are many wacky cameos, including Matt Damon, Vinne Jones, Lucy Lawless, Fred Armisen and the two stars of Absolutely Fabulous. Also starring Michelle Trachtenberg.

Eurotrip breaks the mold of many teen comedies, in that it never actually crosses the line from 'kind of goofy' to 'gross slapstick', and actually succeeds in inserting a bit of warmth and heart into the story.

It was filmed entirely in Prague.

Tropes used in Eurotrip include:

Absinthe Fairy: That is some pretty fucked-up shit right there. Can you say "what the fuck did I do last night?"

"Here's a fun fact about Bratislava: You made out with your sister, man!!!"

Cooper: "Europe is like the size of the Eastwood Mall. We can walk to Berlin from there [London]."
Cooper: "Relax, Paris is practically a suburb of Berlin. It's a nothing commute."

Cooper: This is why France and Germany have always been allies.