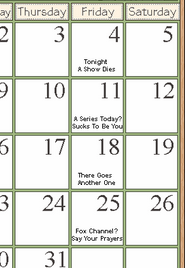 The infamous Friday Night Death Slot is the result of years of poor (some would say deliberately poor) marketing and overly high expectations followed by observations thereof by audiences... that, and the fact that a lot of people like to get out and do stuff on Friday nights, especially since most movies open on a Friday now.

Basically, the idea is this: people - most especially certain demographics, such as the 18-34s who are highly coveted by networks and advertisers - don't watch as much TV on Fridays, mostly because they like to go out to bars, see movies, etc., and just basically blow off a little steam after work/class. Scheduling a show on a Friday - especially early in the evening, such as 8 PM Eastern - is practically the kiss of death.

It should be noted that this is mostly a US phenomenon - in the UK and Norway, and probably other European countries, the very best shows are often reserved for Friday nights (this is particularly true of Channel 4 comedy in the UK - the likes of Peep Show and The IT Crowd are always aired on Fridays) whereas its Saturday night where shows are sent to die (though Saturday evening programming in the U.S. is very fallow, too, in fact more so than Fridays).

Another dimensions of this explains not only why Friday is so neglected, but also why Thursday is the biggest night on TV. Advertisers realize that most American consumers do the majority of their weekly shopping on the weekends, and often do it on Friday. This means that advertisers are desperate to get their product on the airwaves on Thursday, before people go shopping the day after, and don't put as much effort into advertising on Friday (if someone goes shopping after work Friday afternoon, advertising on Friday night is too little, too late.)

Especially if the show is neither family friendly (folks with kids ostensibly stay home on the weekend more often), nor a show that already has much of an audience. And really, really especially if it's on Fox. Or produced by Tim Minear. Or on FOX.

Fridays are thus often reserved for mid-level half-hour sitcoms (see: The WB's lineup of Fridays past as well as ABC's old TGIF lineup in the 90s, though this has declined), reruns, movie airings, shows that the network has absolutely no faith in, or love for (see: Screwed by the Network), and, in modern times, a lot of Reality Shows. Also, compounding this is the fact that Fridays are more likely to have regular shows preempted for things like sporting events on the lower-tier networks and independent affiliates. Sometimes a network will fill time by airing a No Hoper Repeat of a popular show from a different night.

It also has to do with the concept of vertical integration, where television networks who used to not care about whatever movies were playing at theaters during the weekend now must advertise those films on Thursday nights because they're now owned by large media companies with film studios. All six major American networks have studio relationships;

Thus, the networks are mainly forced by their parent companies to not put their best stuff on Fridays, so that a strong show doesn't cause any form of distraction to their box office numbers for the films.

Generally when a show survives in a Friday slot, it's greeted with surprise; when a show is moved to one, the move is greeted with nervousness on the part of fans, who are smart enough to have noticed the number of shows that met a quick and quiet end after being aired that same night. When a show starts in a Friday slot, and it's not a "sneak preview" or "special time" for it, it's almost automatically assumed to be doomed. Even Adult Swim avoided airing shows on Friday for its first few years, and only starts its airings at 10 PM (and now 9 PM), at the tail end of Prime Time.

The Dump Months are the cinematic version of this trope.

Some networks and shows manage to find a surprising amount of success on Fridays, ranging from CBS's Ghost Whisperer to NBC's successful move of Las Vegas from Monday nights. GW is somewhat family-friendly and Vegas had a large, dependable fanbase, a mostly comedic style, and a lot of celebrity guest appearances along with the preexisting tendency to re-air it on Fridays anyway, so these aren't all that surprising, but fans of the shows certainly breathed a sigh of relief when they survived to be renewed. In addition, CBS in its history had numerous series that got great ratings for Friday, the lineup of The Incredible Hulk, The Dukes of Hazzard and Dallas in the late 1970s and early 1980s are the major example. (Meanwhile, Saturday nights, which is an even more iffy time for TV programming at present, were practically CBS's bread and butter in the '70s, thanks to a lineup that included shows like All in The Family, M*A*S*H, The Mary Tyler Moore Show, The Bob Newhart Show, and The Carol Burnett Show.) ABC's TGIF block in The Nineties, with such shows as Family Matters, Boy Meets World, and Sabrina the Teenage Witch, was perhaps the most spectacular subversion of this, as it not only turned the entirety of Friday night into a moneymaker for the network, but also one of its few success stories in what was otherwise a bad decade for the network.

More common and less surprising is the fact that Friday lineups do much better on cable. Such as Adult Swim's Friday lineup, USA Network's airing of Monk and Psych on Fridays, or more impressively, Sci Fi Channel's Sci Fi Friday lineup, which they claim is one of their "biggest" nights as far as ratings go; both the Stargate SG-1 and Stargate Atlantis TV series met with great success in this lineup, as did the imported new Doctor Who series, the 2004 version of Battlestar Galactica, and even the surprisingly successful re-airing of Firefly in 2005, which managed to be their second-highest rated series during November Sweeps of that year, despite its easy availability on DVD. (That is, it was their biggest night, before they separated SG-1 and Galactica, canceled the former, moved the latter to Sundays, pretty much gave Doctor Who away to BBC America, and generally built up more animosity towards the channel than had existed towards them after they canceled Farscape. And then back again, since Eureka is[when?] their most-watched show.)

However, these are frequently treated as exceptions to the rule. The list below shows why.

Examples of Friday Night Death Slot include:
Retrieved from "https://allthetropes.org/w/index.php?title=Friday_Night_Death_Slot&oldid=1928283"
Categories:
Cookies help us deliver our services. By using our services, you agree to our use of cookies.