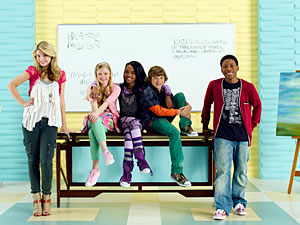 A.N.T. Farm was a series which aired on the Disney Channel between 2011 and 2014. The series follows three best friends, Chyna, Olive and Fletcher, who are part of the Advanced Natural Talents, or A.N.T., which allows gifted middle schoolers to go to High School immediately.

Like many Disney Channel sitcoms, it serves as a vehicle for their new singing star, China Anne McClain.

May be a part of the Disney Channel Universe due to a recent[when?] episode having a Tears of Blood poster in the background.

Tropes used in A.N.T. Farm include:
Retrieved from "https://allthetropes.org/w/index.php?title=A.N.T._Farm&oldid=1723813"
Categories: